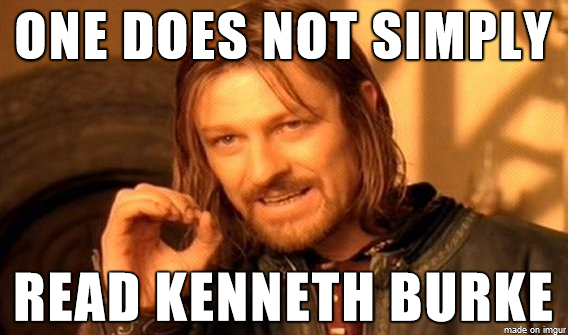 It is my absolute favorite meme of all time, and it ranks just below the top-ranking “God Tier” on http://memegenerator.net – It is Sean Bean as Boromir and his now worldly-recognizable prefix, “One does not simply…” I believe the degree to which this meme is effective and/or funny depends on the degree to which the meme’s author plays with the scene:act ratio and satirizes the original scene:act ratio of the dialogue from The Fellowship of the Ring. In the dialogue, Boromir says, “One does not simply walk into Mordor.” The scene he’s describing is the dwelling place of Sauron, the pinnacle of evil in Middle Earth where there are even “fouler things than orcs, and the Great Eye [of Sauron] is ever watchful.” Clearly the act of merely walking into Mordor would cause a disproportionate scene:act ratio, and Boromir is pointing this out (rather obviously). There are two keys to making this meme work: the word “simply” functions to modify the act of the scene:act ratio to create a parody of the original dialogue; and unless the meme has its own scene to replace Mordor (which they often do not as in my example below), the meme depends on the audience associating the meme’s new object with scene of Mordor on their own (which is reasonable given the immense popularity of the original text and the meme itself). In fact, it’s when the audience merges the material of the meme (the new text) with the ideal of the meme (the original text and moment from Fellowship) that real humor happens. This makes me think that there is fertile ground for satire and parody where materialism and idealism intersect (as I tried to work through in my recent reading document). For example:

The new act is “read,” modified by the meme’s required adverb “simply,” and the new object is Burke which can only be funny when we merge the material (Burke) with the meme’s ideal (Mordor). So when we think about reading Burke being like trying to “simply walk” through Mordor, chances are it will be funny for anyone reading Burke for the first time. I believe a meme like this does attempt to approach peace by relieving anxiety and frustration through humor. Reading Burke can be like trudging through Mordor, but doesn’t knowing that you’re not the only one who feels that way somehow make it seem a little better?