The 2017 Solar Eclipse, Beliefs, and Science

When I really sit down and think about it, I’m amazed at how such a thing can be so accurately predicted. 38 years ago, scientists said with absolute certainty that August 21, 2017 would be the next solar eclipse visible from the continental United States. We take science for granted with such things. “Oh, science says there’s going to be a total eclipse and here’s the exact day, time, and path of it; you can see it best from these cities,” and we trust that. 38 years in the making and we trust it without question. 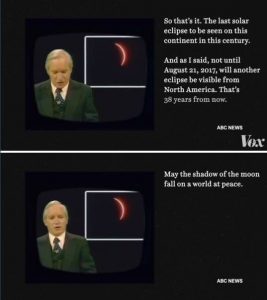 So many of us are travelling around the country to get the best views or perhaps planning to make pinhole cameras so we can observe it safely (we trust science to teach us how to make pinhole cameras). Even if 15 years ago scientists were to have said “Oy! We forgot to take in to account the moon’s declining orbit around Earth over a 38 year period, so now taking that in to account the next eclipse will come two days sooner than previously thought,” we’d probably say to ourselves, “Oh, alright. Well done, science! Thanks! We’ll be sure to mark our calendars. Keep up the good work.”

Yet when it comes to things like climate change and evolution—where these theories have been and are revised and expanded in light of new evidence—suddenly everyone with an opinion or a belief is smarter than science.

Now don’t get me wrong. I’m not suggesting that we don’t question everything. As it is, science operates chiefly on the principal of questioning everything. In fact it’s so good at questioning everything that it can accurately predict total solar eclipses decades into the future. The particular brilliance of science is that it’s indifferent about being right or wrong: if science is right about something, we learn something new; if science is wrong about something, we (still) learn something new. Questioning beliefs, however, is an entirely different matter, for the human equations of ego-centrism and narcissism are most insecure at the notion of being “wrong.” We go to war with science and each other over that.

Just like rhetoric—its ethical use moving us along a spectrum away from misunderstanding, conflict, and war—science moves us toward identification, understanding, and peace.

So, Dear Moonshadow, until next time… we’ll keep working on it.