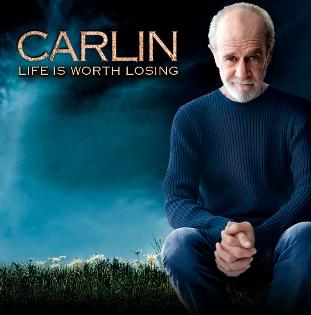 In the Classroom: George Carlin and the Profanity of the American Dream

The current unit my college freshman are doing in my English class is on civic culture and civic engagement. Their primary task is two-fold: they are researching civic culture and are thus becoming more civically engaged. My challenge is more than two-fold: on the one hand, my target demographic—17-19 year old college freshman—is statistically one of the most disinterested demographics in politics and civic engagement; on the other hand, my classes are at 7AM and 8AM in the morning, so you can imagine how difficult it is to keep them awake for a topic in which they’re (mostly) not even interested. Over the short time that I have been teaching—always early in the morning thus far—I have come up with a few techniques to get my sleepy students engaged. I have a naturally loud voice, so I use that to my advantage to keep their attention. I frequently play energetic music before class starts (often finding a song pertinent to the day’s discussion, using that music to help us get started). I almost always have them get up and move around about 10 or 15 minutes into the class. And sometimes I utilize multi-media resources like YouTube. This morning, that’s what I decided to do, and I knew just the trick to get them to wake up after the weekend where they’d lost an hour of sleep due to the time change: George Carlin.

For a unit on civic culture and civic engagement, there’s hardly a better choice than one of modern English’s true masters. He also happens to be second to none in the syntactic manipulation and usage of the word “fuck,” something I knew would keep their attention throughout the 4-minute “American Dream” segment from Life is Worth Losing (2005). I prefaced my showing of the clip with something akin to the above just as a forewarning. Soon after starting the clip, wanting not to distract them with my person as they watched and listened, I repositioned myself to the back of the room near the doorway.

Now I know this routine pretty well, so I focused most of my energy on observing their reactions to Carlin’s language, punch lines, and argument (fully intending on picking his argument apart and talking about it in the discussion that was to follow). I anticipated each chuckle a few seconds in advance, knowing where all of the F-bombs are, and I know the line of greatest profanity comes right toward the end of the clip.

As I began to survey my students faces seconds before the big line, I noticed someone come through the main entrance to the building which is far less than an earshot from the doorway to my classroom. Thinking that this person will get a taste of just how awesome my class is, my first impulse is to smirk. That smirk, however, quickly faded into an “oh fuck” moment of red-faced self-consciousness when I realized that the person who just entered the building was none other than the university president himself, just in time to hear Carlin lament: “And nobody seems to notice; nobody seems to care. That’s what the owners [of the country] count on, the fact that Americans will probably remain willfully ignorant of the big red, white, and blue dick that’s being jammed up their ass holes every single day. Because the owners of the country know the truth: it’s called the American Dream because you have to be asleep to believe it.” I seem to have a way with first impressions at my university. Welcome to my class, Mr. President. Nice to meet you!

EDIT:
To respond to the numerous comments I’ve already received, I’m happy to report that the university president chose not to react, I think opting for free speech and the universality of ideas at the university. Cheers to that!