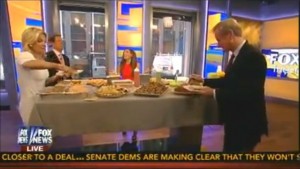 So this recently happened on Fox News. Airing on Friday, October 04, 2013, Fox News celebrated “International Taco Day” with what would have been an innocent segment of Taco Shenanigans with an awesome spread of delicious taco ingredients including both corn and flour tortillas, a variety of meats including mariscos, y, naturalmente, arroz y frijoles. Other than blaring the most cliche piece of music imaginable—”Tequila”—this segment could have been nothing more than a bit of harmless fun (along with an opportunity to actually learn something). And some people have been content to leave it at just that. One YouTube commenter writes, “Eh, I’m as liberal as they come and hate fox news [sic], but this just comes off as some innocent joking among 2 [sic] colleagues” and later, “To me it came off like the guy was playing ignorant to be the butt of the joke, not to sincerely trying to be offensive towards the lady.” Another commenter writes, “Actually she is white and actually his words have nothing to do with her skin color but with her country of origin. Yes, maybe he was wrong about tacos being national food in Nicaragua, I don’t know, but it’s not racist at all.” But is this really so benign?

I hope that some of these are more obvious than others, and I’m sure that these are not the only privileges from the list of 50 that resonate in this Fox News clip; regardless, I want briefly touch on one of these at a time.

#10, #11, & #19 – Maria Malina, the elected representative of her culture (which turns out to not even be her culture, see #21 and #22), consistently struggles to maintain control of the conversation over the two white males (with a nod to the fact that the white female quietly eats her taco in the background). Even when she attempts to inform us on the etymology of the word “taco,” she is interrupted by Brian Kilmeade’s commentary several times. His voice is the dominant voice in this conversation. Not hers.

#20 – When Malina—after a moment of awkward silence—calmly corrects her “colleagues” misconceptions about her nationality and cultural identity, I even caught myself thinking, “Wow—she did a good job not getting angry at them for mistaking her nationality and assuming that all Hispanic-looking people grew up eating tacos.”

#21 – I think this is the most obvious invocation of white privilege in the entire segment. Malina is clearly called to be the spokesperson for her (mistaken) culture by both Brian Kilmeade and Elisabeth Hasselbeck. Kilmeade calls on her by asking for her assistance in constructing a taco “correctly,” and Hasselbeck calls on her by forcing her to answer the hypothetical question, “…but if you did grow up on tacos…” Of course the bitter irony here is that all three of her “colleagues” get her cultural identity wrong.

#22 – Look at Twitter and YouTube for an endless array of responses that invoke this privilege, let alone Brian Kilmeade’s demonstration of this when he clearly does not know that 1) tacos are primarily a cuisine of Mexico and 2) his “colleague” is not Mexican: she’s Nicaraguan. Steve Doocy invokes this privilege as well when he attempts to correct Kilmeade’s ignorance by saying, in the foreground, “She’s Colombian.” Wrong again. So not only are the principal actors invoking this privilege: their supporters on social media are as well.

#50 – As an elected representative of a certain culture (I maintain that Kilmeade elects Malina as a cultural representative when he asserts, “You grew up on tacos”) Malina is clearly marginalized in the public sphere where “whiteness” is established as morally neutral, average, and normal, and anything outside of that culture—whatever “white” culture actually is—is set apart as an exotic “other”

Now. I am not interested, nor is Peggy McIntosh, in pointing fingers and playing the racist card. Rather, I will defer to McIntosh who has already said it best:

In unpacking this invisible knapsack of white privilege, I have listed conditions of daily experience that I once took for granted. Nor did I think of any of these perquisites as bad for the holder. I now think that we need a more finely differentiated taxonomy of privilege, for some of these varieties are only what one would want for everyone in a just society, and others give license to be ignorant, oblivious, arrogant, and destructive. (emphasis added)

What we must do is begin recognizing white privilege for what it is. We have a moral and ethical responsibility to take inventory of genetically inherited, unearned privileges so that we can dismantle those that give license for destructive behavior and make available those that are constructive for everyone to enjoy. This is uncomfortable for us to face, for us to acknowledge, because it forces us to come to terms with what McIntosh coins as the “myth of meritocracy,” that the American Dream is obtainable by anyone as long as you’re honest and work hard every day. The trouble is that while we’re all running the same race, not everyone gets to start at the same place.