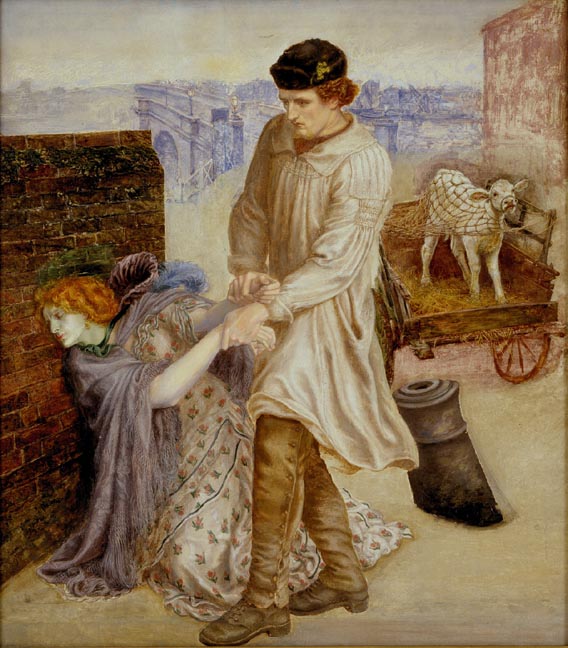 The fallen-woman paradigm has always been something of a sore spot in my brain. There are several questions causing this tension, and their inter-woven nature gives me a headache to try to loose the Gordian knot they tie. For example, one of the fundamental questions I ask myself about the fallen-woman issue is why is all of the focus on the women, leaving the men who perpetuate the cycle of prostitution in the blurry background. Why must women bear the brunt of shame brought on by this market fuelled by the demand of the sexual desires of men? Hell, men aren’t even explicitly in the background: they are implicitly in the foreground. Dante Gabriel Rossetti’s “Jenny” is a testament to these gender dynamics. In a poem centered around a fallen woman, Jenny, Rossetti’s narrator is the only one who speaks! Sure we could say that Rossetti is playing with the dramatic monologue form—and that’s certainly true—but he is choosing to use the form because it is especially appropriate to reflect Victorian attitudes toward women, especially fallen women: they have no voices. Telling the stories of fallen women is the domain of men (particularly—apparently—men who are their customers).
(how to cite this article)

I suppose Robert Buchanan makes a useful observation when he writes, “What we object to in this poem is not the subject. . . .But the whole tone, without being more than usually coarse, seems heartless. There is not a drop of piteousness in Mr. Rossetti” (qtd. in O’Gorman 358). Granted that I am taking this quote from a secondary source and am thus perhaps treating it out of context from the original source, I find the statement useful not because I think it is of itself enlightening—it is a rather obtuse reading, in fact, conflating Rossetti’s voice with his narrator’s voice; rather, it forces us to 1) make distinctions between Rossetti’s voice and that of his narrator and 2) it forces us to question the “heartless” tone with which the narrator uses to deliver his narrative: a dramatic monologue, remember. The heartless tone that Buchanan rightly recognises is perhaps indicative of a general Victorian male attitude toward prostitution and the fallen woman (not necessarily Rossetti’s own view, mind you). The “heartless tone” is designed to call attention to the issue not by attempting to maintain the status quo treatment of prostitution but by shedding light on it. But am I making assumptions on Rossetti’s intent here? In the mitigation of the possibility of my reading being treated as likewise obtuse, I offer a few observations.

It’s through imagery and allusion that Rossetti evokes his sympathetic stance toward Jenny, treating her as a sort of virginal-Mary figure. By the first stanza of the poem, it is made clear that Jenny is a prostitute. Rossetti writes, “…with your head upon my knee; – / Whose person or whose purse may be / The lodestar of your reverie” (18-20). The pun Rossetti makes using Victorian slang for “purse” immediately associates male sexual organs with money all in the context of Jenny’s head being on the narrator’s knee. Yet in the same stanza, in fact just one line earlier, Rossetti invokes the image of the holy virgin when he writes, “Poor shameful Jenny, full of grace” (17). Never minding the obvious reference to the “Hail Mary” prayer—“full of grace” being the common ending to both lines—I also note that Jenny and Mary are both two-syllable names that end in an “e-y” sound. The words “hail” and “shameful” also have similar phonetic characteristics, again both two-syllable words ending in an “el” sound. Along with the references to the holy mother, there are also specific images that, pardon the seemingly contradiction in terms, arouse a sense of the virginal a bit earlier in the same stanza. “…kisses which the blush between / Could hardy make much daintier” give us an image of Jenny blushing between kisses—something we would not expect from a prostitute (7-8). This alone contradicts our assumptions about prostitutes as being fallen rather than innocent. “Fresh flower,” he goes on, “scarce touched with signs that tell / Of Love’s exuberant hotbed” (11-12). So not only does Jenny blush between kisses, she is a “fresh flower” who shows no outward signs of rapacious sex. Hardly the vision we’d expect from fallen women who are at once dirty, untouchable, and insatiable according to certain Victorian mindsets. Stepping away from the text for a moment, there is further evidence suggesting Rossetti’s sympathetic treatment of the fallen woman, and it comes in the form of one of his paintings, Found.

Although I understand that the painting is an unfinished work, the overall layout and composition working with the specific existing visual elements reveal tensions Rossetti sees between fallen women, men, and innocence. In fact, from left to right, subjects could be labeled as such: the prostitute with her craning neck on the left, the man in the middle who has found her, and the calf on the right. The calf’s neck is similarly craning—innocent and pure in its whiteness, trapped by a net not too dissimilar to how the woman seems to be trapped by the brick wall at the left edge. It’s also worth mentioning that The Pre-Raphaelite Brotherhood, a group of poets and painters whom Rossetti was a part, often idealized the purity of Medieval women in their work by highlighting both long hair and long, “craning” necks. The white calf standing in a cart of hay also alludes to the manger scene of Christ’s birth, again bringing unity to the perceptions of the fallen woman and purity rather than treating them as a dichotomy. Curiously, the male figure is the largest element in the scene, located right in the middle. His carries the most visual weight not only by means of sheer volume but by color contrast as well (our eyes immediately move to areas of high contrast—in this case, the white shirt with the black hat worn by the man carries significant visual weight). What’s most significant about this isn’t just that the male is literally the center of our visual attention: he is also the visual element in the painting that is separating the fallen woman with innocence. Note that this isn’t Rossetti perpetuating the dichotomy: I believe this is his attempt to call attention to the falseness of it and who is specifically responsible for it. In a variety of ways, it is not just oil on canvas—it is “Jenny” on canvas, and even if the male in the painting or the male narrator in Rossetti’s dramatic monologue are attempting to conflate the Madonna-Whore dichotomy, they aren’t saying anything. “Let the thoughts pass,” the narrator says, “an empty cloud! / Suppose I were to think aloud, – / What if to her all this were said?” (155-156). These lines reveal that while this is a dramatic monologue, it’s an internal monologue. These are the thoughts of the narrator, not the spoken words of the narrator. Perhaps this is all in an effort for Rossetti to bring the unspoken truth about the Madonna-Whore dichotomy to light.

“Purse” – Thank you, O’Gorman, for the footnote on the Victorian slang for “purse,” making the connection to Jenny as prostitute even more self-evident through the image’s association of male sexual organs and money.

I have not yet read Hilary Morgan’s accompanying commentary on this page for the sake of keeping my own analysis generative and independent.