By now news has widely circulated that a student at California State University, Fresno, later identified as Robert Malik Pryor, posted a threat of gun violence at Fresno State on the pseudo-anonymous social media service “Yik Yak.” My response is motivated for two reasons: on the one hand, I feel compelled to share contexts from the perspective of the classroom as the day unfolded, and on the more serious other hand, I want to draw attention to rather dangerous problems concerning the language that has been used to narrate this event, for the language both denigrates the spirit of the university and the women who were the target of this threat.

The threat was posted a little before noon on Monday, November 2, 2015. Shortly after my 1:00PM class began, a couple of my students brought the post to my attention. I asked them to forward screenshots of the post to my email so I could forward them to the campus police department with a follow-up phone call (a call that went unanswered as their lines were likely inundated with traffic). During this process, I noticed emails from several of my students from my next class at 2:00PM concerning the threat. I immediately invited any of my students who were not feeling safe to excuse themselves from class and sent a similar notice to my students from my 2:00PM class. About half of the students from my 1:00PM class decided to leave, some commenting that they were receiving texts from their mothers saying “Please come home now”; I remained to facilitate our learning plan for students who chose to stay. Only one student came to my 2:00PM class. Incidentally, a day later, an email was sent from “University Communications” stating that “Authority to grant Paid Administrative Leave is limited to the campus President” and that “…as such, non-exempt employees who left campus in advance of their normal work hours will be allowed to ‘make up’ any lost work time over the remaining work days in November.” As an aside, it is great to know that non-exempt employees who left campus because of terrorist threats have the opportunity to make up for what would otherwise be considered lost wages by the university administration. Meanwhile, as the email also reveals, “exempt” employees are not subject to the same rules and face no potential loss in wages nor were they invited or required to “make up” work time. I invite you, dear readers, to make of that what you will.

Although I was unable to attend in person the press conference held by University Police Chief David Huerta and Provost Lynnette Zelezny, I did watch several of the streams of the conference via Periscope. During Chief Huerta’s Q&A session, I was struck by how interested the reporters were in digging out whether the student was an athlete and where on campus the student had been arrested. Seeing as though it was later revealed that the student was an athlete and was arrested in the Duncan Building which is located near the football stadium, it wouldn’t surprise me that some of these reporters had leads that they were trying to confirm. Still, I wondered why this detail was so important to them. Then it hit me.

Journalists are trained to tell the most interesting story—the one that will keep people watching and listening—and the most interesting story is the fall from grace of an athlete (particularly the fall of a football player). As of the time of this posting, the headline on The Fresno Bee’s article covering this story resonates with my assertion as it reads “Fresno State football player arrested, linked to threat on social media of campus gunfire.” The story that gets more clicks is not about a student from California State University, Fresno: it’s about a Fresno State football player. In an early version of the same article, the word student was not even mentioned until the 9th paragraph where Jim Guy was summarizing pieces of Chief Huerta’s statement. Even after revision and extension, Guy only uses the word “student” when summarizing statements from university officials; he himself continues to refer to the suspect as a “football player.” In a follow-up article, Rory Appleton of The Fresno Bee also neglects to refer to Pryor as a student, and one of the article’s highlights at the top of the page read “Suspect Christian Malik Pryor, a Fresno State football player, posted bail.”

This emphasis on “Fresno State football player” is problematic in my view because it continues to present to the public that the university is really about the Fresno State Bulldogs and not the students of California State University, Fresno which incidentally perpetuates a value-system that is often at academic and budgetary odds with universities around the country; it’s also not in the best interests of the students (including the student-athletes): The Fresno Bee reported last year that Fresno State football coach Tim DeRuyter’s five year contract is worth $7.5 million, roughly 18 times that which fully tenured professors earn at CSU Fresno according to the CSU Fresno Salary & Schedule Charts; and, on the other side of the same coin, it usurps the labor of student athletes—for which they are not compensated in the first place—in order to generate more clicks and ad revenue for agencies that are not even a part of the university while making invisible the targets of this threat—the student population.

The language used to edit the events of the day also skirt around what is most at stake with this situation where yet another confused young man with a sense of sexual entitlement served death threats to women who rejected him. Through its editing processes, the media has made it difficult to make this connection. Jim Guy (and/or his editor(s)) engages in such practices, for example, when he directly quotes the entire post except for the most threatening bit at the end:

The post read in part (original spelling retained): ‘the time is here. @3PM I will release my frustrations. Tired of dirty looks, get rejected, nd being talked about bc how I dress. My choice of weapon M4 Carbine…’ (Guy).

Here’s the part he left out: “My choice of weapon M4 Carbine (sic) and I will take a headshot at a hot blonde (emphasis added).” Now I understand one motive in leaving the latter part of the post out is to save the Bee’s audience from what might be considered grotesque, and the “hot blonde” aspect coming from a mixed-race individual introduces racial tensions that the Bee is clearly trying to avoid; however, the grotesqueness is what’s most at stake in this situation! The Fresno Bee even went so far as to characterize Pryor’s [symbolic] action as “not a pure act of terrorism” which was later revised to “not a deadly plan,” presumably because officials did not find an M4 Carbine with which he had threatened to “headshot [a] hot blonde”; how that language could not be a “deadly plan” or a “pure act of terrorism” in the eyes of media outlets like The Fresno Bee further illustrates how hard they work to screen out the misogyny of the situation. I submit that “terrorism”—the use of violence or intimidation through action or symbolic action for some gain—is the more accurate word to describe the entirety of Pryor’s action. Here I am reminded of Stony Brook Professor Michael S. Kimmel’s 2005 essay, “Gender, Class, and Terrorism,” where he points out that the most infamous terrorists are culturally, socially, and/or sexually emasculated men (who can only be emasculated because of their perceived failure to live up to the cultural scripts of masculinity that are forced upon them). To be clear, I am not equating Pryor to the likes of Timothy McVeigh or Mohammed Atta, but the cultural structures that authenticate violent action in the minds of these men are the same, and this is a conversation we must continue having else we risk continuing to stand on the sidelines while watching this pattern repeat.

In my view, it is a moral and ethical outrage that the media so water-down a death threat toward women for merely rejecting a man. This editing process clumsily and mistakenly focuses the conversation on the fall of a football player rather than what’s really at stake. Value systems that make men feel a sense of entitlement toward women’s bodies that then authenticates violence toward women is an ongoing problem, and this should be the stasis of this conversation; unfortunately, the media’s editing processes make this conversation a difficult one to have because, according to them, it’s not even a part of the conversation. In this edited conversation, the victims are made invisible. This was just a “young man’s horrible mistake” (poor guy) and, since no one was head-shot, it was not even a “pure act of terrorism” anyway. 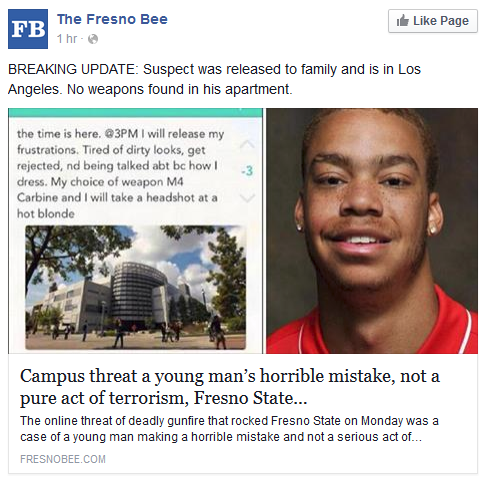 Disclaimer: As with all content on The Snow of the Universe, what’s expressed herein are strictly my own personal views and analyses which are in no way intended to reflect those of any of my employers or their related agencies or entities.