Tennyson’s Paganism in the Middle-Idylls

Tennyson’s Paganism in the Middle-Idylls

I believe there are two fundamental questions that drive my reflection to the middle-idylls of Idylls of the King.

Unlike my previous reflection, I feel like the Pagan undertones in the middle-idylls are subdued to the point of being virtually nonexistent. This puzzled me at first: perhaps this was a line of thinking that Tennyson only by hap wrote in to The Coming of Arthur. At first glance, there are only minor references to the Pagan under-culture surrounding Camelot, and they tend to manifest as malevolent forces that threaten Camelot. For example, when we’re first introduced to Vivien toward the end of Balin and Balan, she says to her squire, “This fire of Heaven, / This old sun-worship, boy, will rise again, / And beat the cross to earth, and break the King, / And all his Table” (450-53, emphasis added). Here Vivien presents old sun-worship—Paganism in a phrase—as a force to overtake Christianity by “beat[ing] the cross to earth” which threatens to destroy Camelot. This alone gives me pause because I personally do not like to think of Paganism as a malevolent, destructive force—whether it’s directly present or an obscure undertone; however, the malevolent presentation by Vivien can be a matter of perspective. After all, Vivien has a point: Camelot is ideal in theory but is being slowly but surely corrupted in reality, perhaps deserving to be exposed for what it is becoming and consequently re-shaped. In this way, I see eye-to-eye with Vivien, especially when she says to Merlin, “In Love, if Love be Love, if Love be ours, / Faith and unfaith can ne’er be equal powers: / Unfaith in aught is want of faith in all” (152). Camelot’s façade failing (with the façade of Arthur and Guinevere’s relationship coming to light), Vivien’s actions may not be altogether malevolent—she’s pointing out the differences between what we see and what’s really going on. But that makes her seduction and subjugation of Merlin all the more complicated.

It may or may not be self-evident, but I take Merlin as the strongest Pagan presence in the Arthur narratives (along with Morgan le Fey and the Lady of the Lake in other narratives). It is so in Idylls of the King as well. At the beginning of Merlin and Vivien, Tennyson describes the setting:

A storm was coming, but the winds were still,
And in the wild woods of Broceliande,
Before an oak, so hollow, huge and old
It look’d a tower of ivied masonwork,
At Merlin’s feet the wily Vivien lay. (1-5) 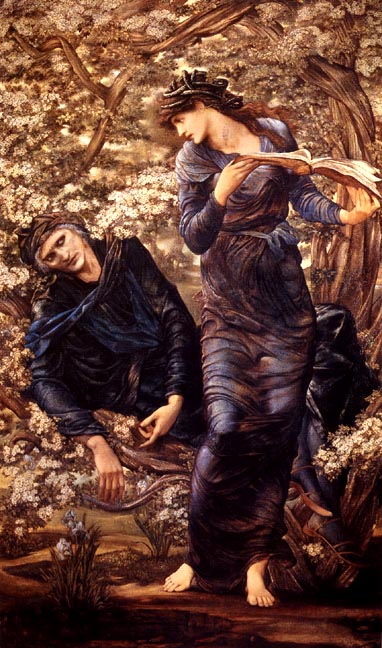 The “wild woods” and “huge and old” oak tree invoke a sense of the ancient, the Pagan, while at the same time paralleling the appearance of ancient Merlin himself. “A storm was coming,” aptly foreshadows the dark age of Camelot, too. Yet the strongest pagan symbol in the narrative, one who is the master of his art, the seer, the sage, has his charm worked against him by the force in the narrative that wants paganism to destroy Camelot. How can a mere trickster overpower Merlin? This makes me think of a scenario where Shakespeare would have allowed Caliban to subdue Prospero. Preposterous! Perhaps. Might this because Merlin advocated a balance between the Pagan and the Christian, a balance that is failing? As the idylls reflect, the presence of the pagan in Arthur’s court seems to be vanishing (along with the ideals of knighthood and courtly love), so it makes sense that Merlin’s power would be waning as well, allowing him to be subdued by a stronger, more domineering pagan force like Vivien. Interesting that threats seem to be coming from outside of Camelot because the inside of Camelot is undoing itself.

Camelot seems to be possessed with the habit of chasing after ideals that are, in reality, impossible. One of the thick threads causing Camelot’s implosion is the failure of ideally matched relationships and the refusal of potential and realistic relationships. Arthur and Guinevere’s relationship is clearly the flagship failure. According to cultural codes, they are a good match both in terms of intellect and class. Guinevere refuses—for lack of a better word—that relationship because she has fallen for Lancelot, and Arthur turns a blind eye to this. Lancelot essentially has his pick of any woman, including the well-suited Elaine (but perhaps for her youth as he claims, yet an older man paired with a younger woman was by no means out of the ordinary for both antiquity and the Victorians); however, Lancelot refuses Elaine and all others, preferring to pine away for the one woman he knows he cannot be with. Elaine also passes on a good match, Gawain being a good match her for. Like Lancelot, she holds out for someone who she knows she cannot be with and, like Camelot is doomed to follow, dies of a broken and lonely heart. In this, the ideal begins to destroy itself through a deconstruction of its own ideal nature, just like questing for the Holy Grail, another ideal in the space of symbols, contributes to Camelot’s destruction as well.