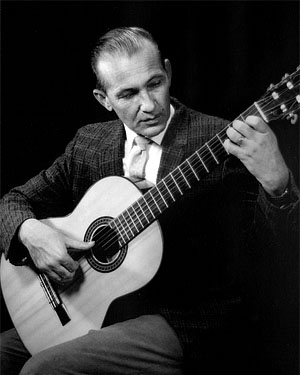 Remembering my Grandfather on December 7, 2011

Yeah, I had it in me to run away from home once. I was 10. I got to the middle of our country driveway, and when I stopped to consider the emptiness of the road ahead (and having to leave my bag of toys behind), I relented and came back inside. I imagine most of us go through that phase, and my grandfather was no exception. His is a different story though. Born on January 20, 1926 in Stephens Texas, J.B. Whalen also ran away from home in 1941, but the empty road ahead of him was the desire to enlist in the United States Army. He turned back home only after he was turned away by the army because they suspected he was underage. If you do the math, you’ll see that they were right: he was only 15. Shortly after his mother, Eva, retrieved him, J.B. ran away again. After he came back for the second time, his mother said, “Well J.B., if it’s gonna be like this, I’ll just go ahead and sign for you,” and she helped forge his records so that he could enlist underage.

When he told me this story, that he lied about his age to get into the army, I wasn’t quite sure I believed him. You know how grandfathers are. They are prone to certain, shall we say, exaggerations in their autobiographies (for the sake of good storytelling, of course). Yet today, right in front of me, I can see his World War II enlistment record provided by ancestry.com from an indexed database of draft cards from the Fourth Registration, “the only registration currently available to the public (the other registrations are not available due to privacy laws). The Fourth Registration, often referred to as the ‘old man’s registration’, was conducted on 27 April 1942″ according to ancestry.com. 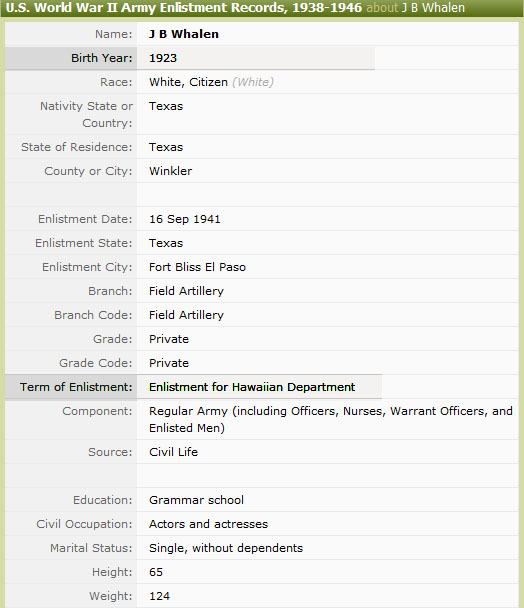 I look at this and have a hard time doubting the rest of his stories, including the story of the morning of December 7, 1941. That morning was no different than the rest: it was usual for the guys to get out of their bunks and have their morning cigarettes outside of their barracks early in the morning before their duty started. When they initially heard the bombers off the coast a little after 7:30am in the morning, they all just assumed it was an American-manned drill. It wasn’t until they saw battleships such as the USS California go up in flames that they realized something was terribly wrong. There was no warning. No one was prepared. J.B. Whalen was not among the 2402 servicemen that were KIA that day, but he was among the men who volunteered to put their lives in harm’s way, and he was among the men who earned the right the wear the badge of Veterans proudly–and he did this before he was even 16 years old.

I miss him, and I wish I would have taken the time to know his stories more thoroughly. I take comfort and pride in days like today, however, and I can feel his spirit when I think about the nights I used to sleep over, drifting into a dream while he played Segovia perfectly.